Collyridianism was an obscure Christian movement considered heretical by the Catholic Church. Its followers apparently worshiped the Virgin Mary, mother of Jesus, like a goddess. Catholic theologians argued that Collyridians went beyond the Marian orthodoxy line of Catholicism and became idolaters.

The primary source of information on this sect comes from Epiphanius of Salamis. They wrote about them in his work entitled Panarion, about 375 AD.  Most of the early heresies were Trinitarian and Christological in nature. Still, Collyridianism stood alone as a heresy that sought to deify the Blessed Virgin Mary.

Little is known about the movement's theology. Not even the names of the group's leaders are mentioned by writers of the time. 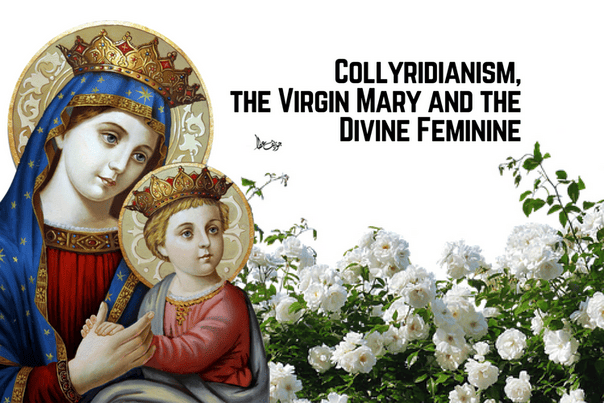 The Divine Feminine Version of the Ancient Times

According to Epiphanius, some Saudi (largely pagan) women have syncretized their indigenous beliefs with Mary's cult by offering her cakes and loaves of bread.

Little is known about the origin of Collyridianism, but Epiphanius asserts that it was practiced mainly in Thrace and Scythia.  He coined the expression Collyridians which has the meaning of "cake-eater-sect."  Leontius of Byzance had a different name for them. He called them "Philomarianites," meaning Mary-lovers (PG 87, 1364).

The Many Faces of the Same "Divine Woman".

The Collyridians settled in Arabia. Saint Epiphanius, who said that the Collyridians women taxed the Virgin as a 'foolish cult,' establishing a parallel with Ashtoreth, a Phoenician goddess, denounced this feminine movement as heresy.

Astarte or Ashtoreth (Greek: Ἀστάρτη, Astártē) is the Hellenized form of the Middle Eastern goddess Ishtar, worshipped from the Bronze Age through classical antiquity.

The name derived from her worship in the ancient Levant area, among the Canaanites and Phoenicians. She was also celebrated in Egypt following the importation of Levantine cults there. The name Astarte is sometimes also applied to her cults in Mesopotamian cultures like Assyria and Babylonia.

In his book The Virgin, the author Geoffrey Ashe puts the hypothesis that Collyridianism was a parallel religion to Christianity at its time, founded by the first generation of followers of the Virgin Mary. Their doctrines became assimilated by the Catholic Church at the Council of Ephesus in 432.

The scholar Averil Cameron was more skeptical about saying that worship did not exist, relying on that Epiphanius of Salamis is the only source. Later, the authors simply refer back to his only text.

The Cult of Mary and Collyridianism

Few Christians have heard of Collyridianism. This was a 4th-century movement within Christianity that placed a strong practical emphasis on "Mariolatry.

This was an emergent movement within the controversial scenario of Nestorianism. There is not much information available about this movement. It is certain that they adored Mary and they offered consecrated bread to her.

The scenario in which this issue appeared can be described in these words: "The rivalry that existed between the schools in Alexandria and Antioch, the two theological centers that governed the Christian church's thinking, both Western and Eastern, was characterized by different systems of interpretation of Scripture.

As a legacy of Greek culture, the Alexandrian School used the allegorical method to interpret the Bible.

The Antioch school, on the contrary, opted for the more scientific method of interpretation, based on a grammatical-historical examination of the biblical text".

Their perspective corroborates a fact little perceived by many researchers because it was based on the correct interpretation of the Scriptures and the Christian faith.

The Antioch point of view and "otherification "was under the influence of Gnosticism. As "Origenes" said, it opted for the allegorization of the Scriptures.

The Obscure Origins and Historical Registry

Epiphanius of Salamis (315-403) was one of the leading opponents to react against Collyridianism. He was a friend of Geronimo. He was an ascetic, and while fighting the Mariolatry of Collyridianism, he defended in a highly fanatical way the use of icons.

The germ of "Marianism" occurred because of controversies over theological disputes whether or not Mary was the Mother of God.

The Doctrine of Collyridianism, as we see in this article, never ceased to exist. It never lost its strength. Despite many attempts, Catholicism tries to argue about these issues, using supposed theological terms to distinguish latria from dulia and hyperdulia and veneration of worship.

The theological literature of Roman Catholicism clearly exposes the belief in Mary's claim and in her worship as idolatry. That is, the "perceived" heresy of Collyridianism is still present today in the Catholic liturgy.